The Living Presence of the Heart of God

Washing the Feet of the Poor

Tonight, at the Holy Thursday liturgy, many of the poor were present, having their feet gently washed and dried by others in imitation of Jesus. When I saw it all in front of me—the poor, the washing basins, the awkwardness of the washers, the faces of the silent and reverent congregation—I realized once again what the sanctity of service is and that the truth of the heart of Christ is found in the washing of feet. When I have washed feet, I have realized that it is only from below that I can really see what is above.

A long time ago I read a reflection by Luigi Santucci in his book Meeting Jesus about the bowl that Christ used in washing the feet of his disciples. I remember thinking, like him, that if I had to choose some relic of the Passion, I wouldn’t pick up a scourge or a spear, but that round bowl of dirty water. And I would want to go around the world with that receptacle under my arm, looking only at people’s feet; and for each one I’d tie a towel around me, bend down, and never raise my eyes higher than their ankles, so as not to distinguish friends from enemies. I’d wash the feet of atheists, drug addicts, arms dealers, murderers, pimps, abusers of all kinds—and all in silence, until they understood.

Before retiring for the night, the sights and sounds of the liturgy still ringing through me, I heard on the radio an interview with a Memphis pastor who had been with Martin Luther King Jr. at the motel where the civil rights leader was assassinated. Over the years this same pastor had reflected on the meaning of it all and was led to believe that he was called to be a witness to Dr. King’s life and death.

That is partly how I feel about my life. I am a witness to a movement in me that I can’t understand or articulate. As impossible as it is for me to understand my call to service, there will be people who do get it and who can point to me and say, “There it is, there is faith in operation, there is a believer, there is the holy operating in another human being. It is the guy with the bowl of dirty water in his hands.” They will recognize what they know to be the living presence of the heart of God. I am a witness to that heart, and this may, in the end, be my only contribution, homely and undramatic as it is. I am like the spectacular yet fleeting blooming of an Arizona cactus plant: for just a few days, the world is full of a new and astonishing color.

There are times on the streets when I wonder what...I am doing. And there are moments, usually humdrum and unspectacular, during which I realize that I am to bloom for just a few days so that I might give glory in my work to another kind of beauty that works in and through me. I rebel against this kind of divine interference in my life, especially when it conflicts with my other great loves. But Jeremiah makes it clear that no one chooses to fall into the hands of the living God.

You have seduced me, Yahweh, and I have let myself be seduced;
you have overpowered me: you were the stronger. . . .
I used to say, “I will not think about him,
I will not speak in his name any more.”
Then there seemed to be a fire burning in my heart,
imprisoned in my bones.
The effort to restrain it wearied me,
I could not bear it.
Jeremiah 20:7, 9

from Radical Compassion: Finding Christ in the Heart of the Poor 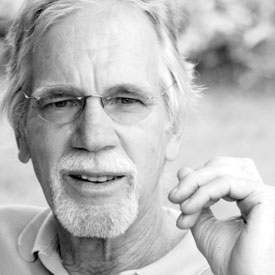 Gary Smith, SJ, a Jesuit priest of the Oregon Province, has lived among and ministered to the poor since 1969.