Pope John Paul II and His Message of Forgiveness

He was the pope of my generation. Etched into the early years of my faith life will always be the early events of his papacy, dramatic and poignant, brought to my living room via the nightly news. An assassination attempt, a prolonged recovery, and later a quiet, heroic act of forgiveness. The picture is famous now, Pope John Paul II and his would-be assassin, sitting together in intimate conversation two years after the incident. The Holy Father, leaning toward the man with gentle attention, and later demonstrating extraordinary restraint in never revealing the contents of their conversation. It is a beautiful picture and the epitome of what makes Pope John Paul II unique in my view. He was unafraid of the vulnerability created by living in forgiveness, of sitting in total love with the enemy. It was a stunning paradox, and one he didn’t just preach about from pulpits far removed from “real life,” but one he lived right to the end.

It was March 12 of the Jubilee Year 2000 when Pope John Paul II made history by asking for forgiveness. Addressing an audience of thousands gathered at St. Peter’s, the pope made a sweeping confession. Noting the Crusades, the Inquisition, and transgressions against Jews, women, and minorities, he said, “We humbly ask for forgiveness for the part that each of us with his or her behaviors has played in such evils thus contributing to disrupting the face of the church. At the same time, as we confess our sins let us forgive the faults committed by others towards us.”

Some critics argued that this was simply a strategically planned exercise before the pope’s visit to the war-torn Middle East, or the natural political inclination in the Jubilee Year, a traditional time to forgive all “debts.” However, there was great and holy humility, as well as fearlessness, in his choice to publicly request forgiveness. Maybe it was the same holy humility that inspired Pope John Paul II to study for the priesthood underground during the Nazi occupation of Poland. Had his studies been discovered, it would have cost him his life, but his need for God was greater than his need for security. We can all learn from his example.

The centripetal forces of ecumenism and forgiveness behind his public act of repentance in March 2000, like the forgiveness he extended to his would-be assassin, are the same forces that fed his entire papacy. Christ chose Peter to serve as the rock upon which he would build his church, and Peter was martyred for it in the end. The pontiff is the natural successor of Peter, to whom Christ gave the power “to bind and to loose,” and the post must be an impossibly difficult one. Pope John Paul II was loved deeply and hated bitterly. Millions prayed for his intentions daily, even as rock idols ripped up his picture on national television. In a world so fatherless, so abandoned by figures of strength and interior authority, we need a pope. We need to ask for the grace of repentance. We need to ask forgiveness and receive it. We need to offer it liberally and without charge to our neighbors, our enemies, our families, our governments, ourselves. Even while bearing the weight of the controversies that threaten to tear the church apart, from within and without, even while bearing the isolation that surely must come from carrying such a weight, Pope John Paul II uttered a constant refrain of fearless, abundant forgiveness born of love.

“Certainly forgiveness does not come spontaneously or naturally to people,” he wrote. “Forgiving from the Heart can sometimes be heroic. . . . Thanks to the healing power of love, even the most wounded heart can experience the liberating encounter with forgiveness.”

Yet asking for forgiveness in our culture is often seen as a supreme act of weakness, even foolhardy naïveté; the more popular attitude is “Never let ’em see you sweat.” It robs us of our humanity to no longer recognize the truth that we are creatures who sin, creatures who need forgiveness and a Savior. This tragic false belief robs us of the very mechanism by which we might realize peace.

“Real peace is not just a matter of structures and mechanisms,” wrote Pope John Paul II. “It rests above all on the adoption of a style of human coexistence marked by mutual acceptance and a capacity to forgive from the heart. We all need to be forgiven by others, so we must all be ready to forgive. Asking and granting forgiveness is something profoundly worthy of every one of us.”

It is this message of reconciliation that John Paul took quite literally to the ends of the earth. (Global papal visits numbered 250 in the course of his papacy, not counting the audiences he gave within the Vatican to numerous heads of state, dignitaries, and others from around the world.) I believe it is this message that is helping re-anchor my generation: Forgive us our trespasses as we forgive those who trespass against us.

During the Jubilee Year, I had the opportunity to see the pope many times. One encounter will always stand out in my memory.

It was a rainy day in February, but the piazza at St. Peter’s was still packed, weather never being any kind of deterrent to seeing the pope for so many pilgrims. We gathered together on cold black plastic chairs, trying to stay warm and secure a seat where we might get a close picture.

Just in front of the group with which I was sitting was an Italian family of five.

As the pontiff began to address the crowd, a woman in the family who seemed close to my age began weeping, and to my great surprise she pulled out a cell phone and quickly dialed a number. As the Holy Father’s voice echoed out over the wet and shivering crowd, she said into the phone, “Mama, la voce del Papa” and held it up over her head.

We sat there in the rain and wept with her.

Indeed, his voice has been remarkable, if at times controversial, one that has carried the tender and beautiful messages of ecumenism, forgiveness, and redemption, one that has blessed my life and my faith in lasting, gentle, heroic ways. I will always miss him.

We pray for the repose of the soul of Pope John Paul II. 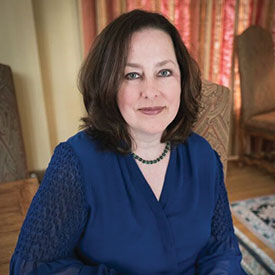 Elizabeth M. Kelly is an award-winning speaker and the author of six books, including Reasons I Love Being Catholic, which won the Catholic Press Association award in 2007 for Best Popular Presentation of the Faith.

A common error in talking about forgiveness is the challenge to "forgive and forget." To forgive is to give up any desire for recrimination or revenge. It is possible to do that, but what is not possible is to let go of the memory of hurt caused by others. Jesus never commanded us to do what is impossible, and what he wants us to do is control the memory so that it will not control us. Another common error is to portray forgiveness as an easy task. Consider Jesus' dying words of forgiveness aimed at his executioners. Those words are left out of many of the oldest manuscripts. Biblical scholars are rather certain that Jesus actually said the words, and they wonder if perhaps the copyists left the words out because they were having trouble themselves forgiving the people responsible for the death of Jesus. Real forgiveness is hard. It requires lots of help from God.