See all articles in this series. 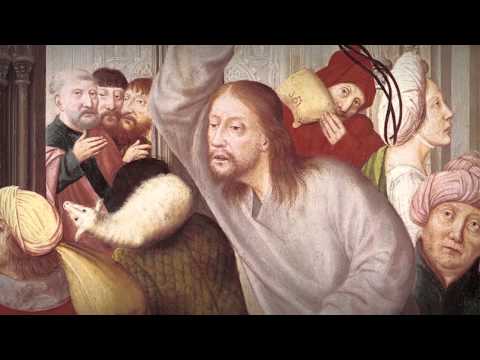 Quentin Matsys, the Flemish master of the 16th century, was known for his caricature painting and satirical commentary. In his Jesus Chasing the Merchants from the Temple, we see his caricatural style shine. Each person in this image has a unique expression, even the lamb being carried away in the center of the scene. Matsys was not one for flattery—the faces of some of the merchants border on grotesque, though not all. He is careful to maintain these as human faces, ones we can identify with and see ourselves in.

The scene includes the range of characters noted in the Gospel story. Christ is in the center, driving out the merchants with his rope whip, three merchants receiving his blows. One of them, perhaps a money changer, lies on the ground, his table flipped, his coins scattered. Another merchant is just making his escape with a lamb on his back, while the most grotesque one on the left is trying to get away with his goods under his arms. In the back left, three distinguished-looking men observe—these are perhaps the Jewish leaders who debate with Christ about the Temple in John’s Gospel. To the right of the scene are three additional onlookers: one more merchant partially concealed by a sack, a seated figure, and a Temple-goer, whom we see in profile.

The setting evokes the idea of the Temple, but in fact it is a high-Gothic church contemporary to the artist’s time, perhaps the Cathedral of Antwerp, the town where the artist was most active. Likewise, the colorful clothes each character wears tell us that Matsys set this scene not in the Temple of first-century Jerusalem, but in his own 16th century. This is a not-so-subtle satirical commentary suggesting that perhaps the Church at his time needed Jesus’ cleansing. Yet, through the use of thoroughly human faces, it is not just the people of Matsys’s time that needed repentance and purification. The image invites us to see ourselves in it as well, to see and acknowledge honestly those areas of our lives needing a major cleaning. The variety of faces offer several entry points for us—the person on the ground, the one escaping, the one looking on, the one hiding, the one at a critical distance—where do we find ourselves in this image?