The Largest Statues of Christ Around the World

Learn more about how we can support you in response to the coronavirus in this letter from our president and publisher.

Outsized Faith: The Largest Statues of Christ Around the World

We’re told from the time we’re young that God is immense—huge, universal, everywhere. How could any artist capture this?

In churches we encounter life-size statues of Christ, but it’s outside that we find the oversized and iconic statues that seek to convey the immensity of God. And at their base we sense their massive presence, as well as the depth of faith required to construct these religious monuments. 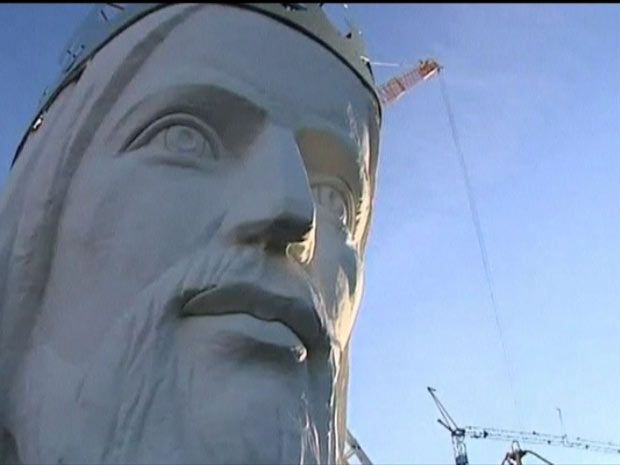 Perhaps the best known of these statues is Christ the Redeemer in Rio de Janeiro, Brazil. This 98-foot statue of Jesus looms over Rio with its arms outstretched. Christ the Redeemer has appeared in movies and countless tourist brochures, and has become a visual icon of the largely Catholic nation of Brazil. The creation was first envisioned in the mid-1850s, but the idea languished. By the 1920s a group of Catholics began raising donations, and the statue was finally finished in 1931.

Bolivia’s Cristo de la Concordia is the tallest statue of Christ—at 132-feet tall—and it adopts the same posture as Christ the Redeemer.

Cristo-Rei in Lisbon was begun after the Portuguese cardinal visited Rio de Janeiro. The statue, inaugurated in 1959, is 92-feet tall and stands atop a 269-foot pedestal on a cliff welcoming visitors to the Tagus River region.

Cristo de las Noas in Mexico is also posed like its Brazilian counterpart. At 71-feet tall, it was completed in 2000.

A smoother, more graceful statue welcomes the faithful in Maratea, Italy. The 69-foot Cristo Redentore has outspread arms gently lifted upward as if to raise the hearts of the followers. Finished in 1965, it was financed not by donations but by the contributions of one person, entrepreneur Stefano Rivetti.

In stark contrast to Cristo Redentore, Poland’s Christ the King is indeed regal. The 108-foot-tall figure is crowned with a 9-foot-tall crown. For five years, workers toiled to complete the idea of one retired Polish priest who financed with local donations.

Half-way around the world in Vietnam, a small group of Catholics collected donations and worked for nearly 20 years to complete Christ of Vung Tau. The 105-foot-tall statue seems to loom from the top of Mount Nho shoulder-deep in forest as it welcomes visitors to climb its 133 steps to the top.

Perhaps one of the most controversial statues in this collection resides in the Transylvania countryside. Heart of Jesus is a 72-foot-tall modern and dramatic sculpture of stainless steel. Like many other statues, it draws inspiration from Christ the Redeemer in Rio de Janeiro, and was completed in 2011.

These huge monuments to Christ are collective creative efforts of visionaries, artists, patrons, engineers and laborers. They pay homage to God and attempt to render the central character of our faith in a scale befitting a king.