During Advent, we are invited to go back in time, to imagine the many centuries of waiting for the promised Messiah. In the northern hemisphere, the days are short at this time of year, and it is easy to imagine those centuries as times of darkness.

The familiar Advent hymn “O Come, O Come, Emmanuel,” in both words and music reinforces the metaphor of darkness. Each verse describes some form of suffering from which the people beg deliverance, such as “lonely exile,” “depths of hell,” “gloomy clouds of night,” and “death’s dark shadows.” The traditional melody captures both that darkness and the hope expressed in the series of titles by which the Messiah is addressed:

These verses are paraphrases of the “O Antiphons” that have been chanted at Vespers in the Western Church at the end of Advent (December 17–23) since at least the eighth century. In the modern Roman Catholic Church, they are sung in English at Evening Prayer and, in slightly modified form, as the Alleluia verse before the Gospel. They also appear in Anglican and Lutheran liturgies. But the tradition is even older: all the names used for the Messiah are derived from the prophet Isaiah, whose vivid poetry is read at liturgies throughout Advent in Roman Catholic and other Christian churches.

Thus the hymn we sing so often during Advent connects us to our precursors in the faith, going far back in time.

Why preface all these invocations with “O”? In modern English, we might more informally call on “Emmanuel” or the “Morning Star” without any prefatory interjection. The litanies of the Blessed Virgin or of the saints, for example, consist of a long list of names and titles with no preface. “O”—older and more formal than “Oh”—signals powerful emotion. The names that follow are deeply meaningful and reverent, and the petitions are of eternal significance.

There are various translations of the hymn “O Come, O Come, Emmanuel,” and the modern English version of the O Antiphons in the Liturgy of the Hours is different from all of them. Whatever the words, we are invited into the darkness in order fully to appreciate the blazing light of the Incarnation. 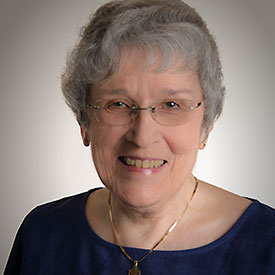 Barbara Lee is a spiritual director with a ministry to the aging who lives in New York City. She is a retired attorney, a former U.S. magistrate judge, and a long-serving member of the Ignatian Volunteer Corps, an organization of retired people inspired by Ignatian spirituality who perform volunteer work among the poor.