Expectations have a lot to do with how we experience the holy days of Christmas. One year, my expectations almost prevented me from enjoying the grace that accompanied me.

I grew up with three older brothers, and all of them had been altar servers at our church. In this role they managed to get the best assignments, which included one of the most glorious services of the year: Christmas Midnight Mass. Serving at Midnight Mass was often the perk of being an eighth grader. I, too, became an altar server, and during my eighth-grade year I looked forward to serving at the Midnight Mass, with all of its pomp and majesty. I would wear the starched white collar and the white cassock with matching gold cape and clean linen gloves. I imagined being part of this once-a-year spectacle while also having a front row seat to all of it. And I had earned the privilege, never once missing or being late for a serving assignment, not even at the weekday 6:30 a.m. Masses.

But when the holiday assignments came out, instead of the High Mass in the church, I was relegated to Casey Hall in the school to serve Mass on the small stage in front of a crowd of people I rarely saw in church at any other time; they knew the Mass would be over at least an hour before the High Mass in the church. (Retired military chaplain Fr. Wall, who would celebrate the hall service, was known in our parish as one of the fastest celebrators of Mass ever.)

My parents sometimes attended Midnight Mass, but it depended on how tired Dad was after a long day of last-minute shoppers in the family grocery store and how tired Mom was from all the preparation for the next day’s Christmas feast. I couldn’t count on seeing them there—and anyway, I knew they preferred the High Mass in the church on this special night of the year. To make matters worse, my serving partner hadn’t shown up, making me feel even more alone.

So there I was in my simple black cassock and wrinkled surplice, serving all by myself. A slightly out-of-tune piano led us in “O Come, All Ye Faithful” as I walked with Fr. Wall from the wings of the stage to the makeshift altar. I was thinking about the procession in church just across the way, led by my classmates who carried the gold cross and the incense while the old organ, accompanied by trumpets, rattled the church walls. My heart wasn’t into this place that smelled like disinfectant and chalk.

But when I went to stand next to Fr. Wall for the Gospel, there were both my parents, sitting in the folding chairs in the first row, smiling at me. They looked so proud, even though I wasn’t in the church all dressed up. The Mass was over in just under 45 minutes. My parents waited for me on the hall steps, and we drove home in Dad’s blue Chrysler Windsor Deluxe. It was cold and crisp and clear, as good a Christmas Eve as anyone could have asked for. 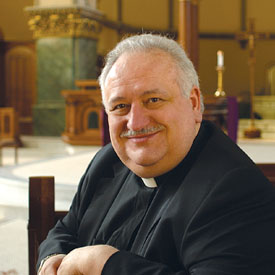 Dominic Grassi is a pastor on the north side of Chicago.