Praying the Stations of the Cross

When we pray the Stations of the Cross, we might remember those who are sharing in the Cross of Christ through their suffering and illness, as well as those who assist in serving the sick. The transcript follows the video.

Hi everybody. Cardinal Dolan on this Friday of the Third Week of Lent. You know, one of the most meaningful and significant devotions, or prayers, that we have during the Lenten season is the Way of the Cross—the 14 Stations of the Cross. Our parishes have them. A lot of people make them on their own. And they are extraordinarily spiritually rich. As we unite with Jesus on his way to his suffering and Death on the Cross through the Stations of the Cross, we follow spiritually and morally, through the eyes of faith, in all the 14 steps leading from his condemnation by Pontius Pilate all the way around to being put in the arms of his Holy Mother and being put in the tomb.

And remember people like Veronica, who soothed the face of Jesus on the Way to the Cross. Remember Simon of Cyrene, who helped Jesus carry his Cross. Remember his Mother Mary, who consoled him as he was carrying his Cross to Calvary. We pray during the Stations of the Cross on this Friday of Lent for all those splendid people who are assisting the sick. In serving the sick, they’re serving Jesus, because, remember, he told us as long as you do it to one of these, the least of my brethren, you do it for me. A blessed Lent everybody. 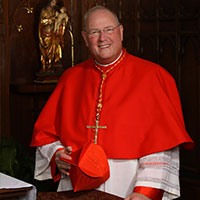 ​His Eminence Timothy Cardinal Dolan was named Archbishop of New York by Pope Benedict XVI in 2009.