Finding God in the Midst of Halloween

The Masks We Wear

It was October 31, and Maeve Dolan knew that her students at St. Genesius Academy would be preoccupied with Halloween. Her favorite saint, Ignatius of Loyola, taught that God could be found in all things.But Maeve wondered: could she help her students find God on this day? She pulled on her tweed blazer, hoping to borrow confidence from the garment that somehow helped her feel like a teacher.

For her Sophomore class Maeve placed a paper bag on her desk. She removed sculpting clay, face forms, paints, and an assortment of art supplies. “Instead of reading about the history of Halloween today, I thought we’d make some masks and discuss their meaning. Anyone know why we wear masks and costumes on Halloween?”

“Because it is our secret desire to be ghosts and pirates and Freddy Kruger, waahaahaa—” Brian intoned in mock Hollywood fright-fest style. The class laughed.

Melissa raised her hand. “Ms. Dolan, I read once that the Druids used masks as a way to connect with the spirit of what they depicted, trying to gain the spirit’s power.”

“Yes, Melissa,” Maeve said. “Think about the costumes and masks you have worn over the years on Halloween.” Students called out a litany of heroes and antiheroes: Power Rangers, Batman, Wonder Woman, a vampire, Cinderella, a Roman god, a hobo.

“We dress in costumes once a year because that gives us a chance to be someone else, either someone or something we admire or are afraid of, don’t you think?” There was a general hum of agreement.

“What about the rest of the year? What costumes or masks do we wear then?”

More answers came. “Well, the football team wears jerseys and helmets.” “Judges wear robes.” “Whenever I’m in a play,” Jenina piped up, “I wear a costume. It makes me feel so different, like I really am the person I’m playing.”

“What about the other masks we wear that aren’t physical costumes?”

“Do you mean stuff like smiling when we are sad, pretending to be confident when we’re scared, wearing a cool outfit when we feel like a big dork?”

“That’s exactly what I mean.”

“But who would want to go around letting everyone know how he really feels?” John asked. “We’d be so—I don’t know—vulnerable,weak, naked even.”

“That’s right. Is there anyplace or anyone with whom you can be that vulnerable—where you don’t need to hide behind a costume, or think about an outfit or an expression on your face to hide who you really are?” By now the class was truly attentive.

She reached into the pocket of her blazer and pulled out a wooden crucifix—the body of Jesus nearly naked, nailed to the wood—and held it up for the class. “Is there anyone at all with whom we can abandon our costumes?” Maeve put the question to the class, allowing them to reflect silently as she took off her blazer and draped it on the back of her chair. 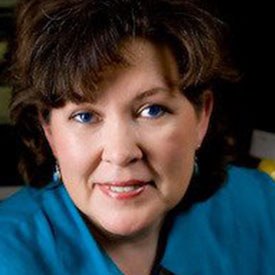