What I was trying to get at in this reflection is the paradox that it’s often when we allow ourselves to be open and vulnerable that we are most likely to experience peace. Here’s a story that might just make my point even better.

The day after I graduated from 8th grade my family moved to a suburb a good distance away from our old Chicago neighborhood. I didn’t know anyone where we moved, and I missed my friends back in the city. So my parents encouraged me to invite my friend Billy to spend a weekend with us.

I was nervous before he arrived. Though it had only been a few weeks since we’d seen each other, everything had changed. We were out of grammar school. We didn’t hang out every day riding bikes like we’d done for years. We would soon be off to different high schools. In my fear of being inadequate for what lay ahead for me, I felt I had to appear cool.

So before Billy arrived I went through my bedroom to eliminate anything I thought was too immature for someone in high school. I hid my comic books and put away games I thought seemed too childish. And then I noticed Timothy John, the stuffed panda who had been my most reliable pal since I was three. I almost didn’t notice him in the corner of the bedroom. He had always just been around. But not now. And so up in the attic he went.

Billy arrived and it took us a while to get reacquainted. Something felt stilted. As we got ready for lights out, Billy opened his suitcase and said, “I hope you won’t laugh, but…” and he pulled out a well-worn stuffed bear. “He helps me sleep,” he said. With that moment of openness, something changed. This was the same buddy I had always known and trusted. He was the bravest kid I knew back then, and went on to be a much-decorated police officer. He remains one of the most genuine and tender men I’ve ever known.

That night we talked long into the night about our fears about high school, about girls we liked in grammar school but never worked up the nerve to talk to, about what we hoped our lives would be like when we grew up, and even a bit about our friendship and how we hoped it would last.

As Billy risked openness, vulnerability, and trust, peace returned to our friendship. I think of his courage when I’m tempted to rely on guardedness and suspicion to make me safe. The recipe for peace is paradoxical—lay down your defenses. 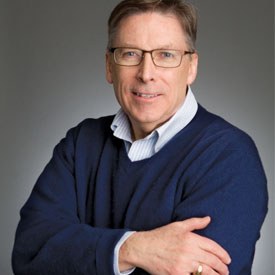 Tom McGrath is the author of Raising Faith Filled Kids, The Meal Box, and is one of the authors of the God?s Gift series.