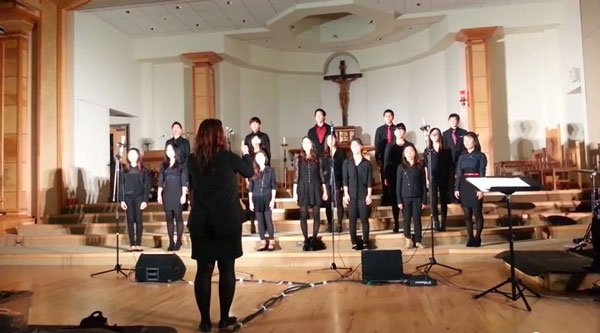 Fifteen years ago Han-Ah Park discovered a new world with new customs and a new language. The then-11-year-old traveled from Korea to British Columbia, Canada with her family to start the next chapter. She was young, curious, and full of faith.

Her family joined St. Andrew Kim Parish in Surrey, and there Kim’s love of music and of her faith began to blossom. Now as a college graduate with degrees in music and education, the 26-year-old leads that same choir at St. Andrew. With each rehearsal and Mass, she blends her love of music and her faith into a ministry reaching out to other young people who, like her not that long ago, are finding their way in a different environment.

“It’s through music that I try to show people God’s love—it’s the same love I feel from God.”

“I was raised Catholic and my parents insisted that my faith come first before anything, even before my pursuit of music,” said Han-Ah, who plays the clarinet, piano, and most brass and woodwind instruments.

True to their wishes, she remained active in her parish community in many roles—even continuing to volunteer as a catechist while pursuing her studies in music at the University of British Columbia. She always returned to her parish community to lead the choir and share her gifts.

Along the way she noticed that some children who emigrated from Korea were falling away from the church and their faith. The trend disturbed her but she understood why: the stresses of being in a new country can have a negative impact on families and young adults. Han-Ah saw this in her community each day.

“Many children come here and face hard choices,” she said.

Han-Ah uses music as part of her own personal ministry. She wants to help young adults face the challenges of immigrating to a new country by attracting them to the Church. So she became a youth choir director and began growing the program. Now, about 30 young adults are in the choir. The choir sings at weekly masses and collaborates with the parish string orchestra as well as with other musicians in the parish community. Initially many of these young people were forced by their parents to attend church. But after becoming involved with Han-Ah’s choir, these same young people see themselves as active members in the church community. The average participant stays involved in the choir for two to four years.

“You don’t have to be a good musician to benefit from music,” said Han-Ah. She has seen how music connects people without the use of language, which is invaluable in her community as people try to assimilate to their new lives in British Columbia.

A teacher in high school convinced Han-Ah’s parents to allow her to study music. The same teacher taught Han-Ah that the most important thing is not to just educate the student, but to nourish the student. Han-Ah has taken this notion to heart. She is grateful to God for the gift of her musical talents, and wants to share those gifts as a way of leading others to God.

“It’s through music that I try to show people God’s love—it’s the same love I feel from God.”

Watch Han-Ah direct her choir in this performance at her parish.