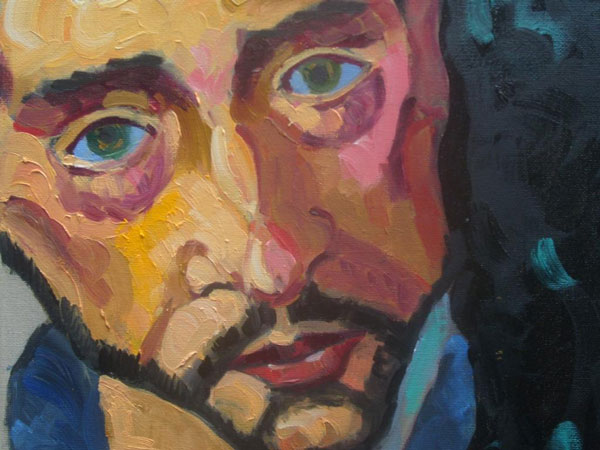 In 2010, John Bateson-Hill, an occupational therapist, was struck by an image of St. Ignatius painted on wood at the National Gallery in London.

The image, created in the 1600s to help increase people’s faith in Spain, appeared in The Sacred Made Real: Spanish Painting and Sculpture exhibition. Hill was so haunted by the saint’s expressive eyes that he went home and began to sketch. What emerged was an equally haunting painting of St. Ignatius, full of bright colors and eyes that search the viewer. The painting now hangs in the Jesuit community in Brixton, England.

“Funnily enough, people say [my paintings] are religious—even the ones that aren’t,” he said. “When I’m painting religious, I like to somehow communicate a sense of life.”

The artist said religious art is hard to do.

“You do a religious painting and some people are not interested at all. It’s hard to strike the right note.”

Bateson-Hill’s artwork is striking, full of bold and bright colors, and often in modern contexts. One image shows Christ with blue-black hair. Another is of Sarah and Abraham at the Brixton tube stations with all their belongings as if they’re setting off on a journey.

For Bateson-Hill, creating religious art is a way of expressing his faith.

“It’s part of me. It’s important to me and therefore I want to express it,” he said. “You’re sort of praying while you’re doing it.”

Bateson-Hill never went to art school. His mother was a painter, so he spent his youth often painting on a canvas in her studio. He took a break from the practice, but a returned a few years after he graduated. Now, he paints almost every day.

“It went to sleep for a while and sort of re-surfaced. Now I can’t stop doing it,” he said.

View Bateson-Hill’s paintings and prints in this slide show.