The Sacraments: Gifts of Faith

The structure of Baptism demonstrates the critical importance of cooperation between Church and family in passing on the faith. Parents are called, as Saint Augustine once said, not only to bring children into the world but also to bring them to God, so that through Baptism they can be reborn as children of God and receive the gift of faith. Thus, along with life, children are given a fundamental orientation and assured of a good future; this orientation will be further strengthened in the Sacrament of Confirmation with the seal of the Holy Spirit.

The Eucharist is an act of remembrance, a making present of the mystery in which the past, as an event of death and resurrection, demonstrates its ability to open up a future, to foreshadow ultimate fulfillment. In the Eucharist we learn to see the heights and depths of reality. The bread and wine [become] the Body and Blood of Christ, who becomes present in his passover to the Father. This movement draws us, body and soul, into the movement of all creation toward its fulfillment in God.

Excerpted from On Faith by Pope Francis. 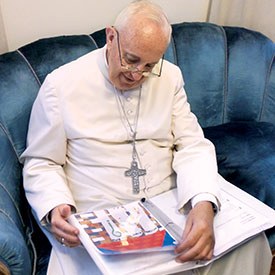 Pope Francis is the first Jesuit Pope, the first pope from the Americas, and his papacy is defined by his emphasis on mercy, service, and humility.