Friends are friends no matter what, right?

Well, you sure hope so. You hope that your friends won’t let you down when you need them most. You depend on them to not reveal your secrets or make fun of you in a mean way.

Friendships can feel really strong and easy to keep in good times. But the test of a friendship happens when, for some reason, we’re tempted to betray our friends. If we can stick out the temptation, we know that our friendship is real.

It’s good to remember that faith is a friendship—a close, trusting friendship with God. We’re loved, supported, and helped by God all day long. We tell him our troubles and our joys. You and God go through each day together, and he will be with you for the rest of your life. That's a friendship. That’s faith.

Sometimes you might be tempted to betray that friendship, just a little bit. You might be embarrassed to admit that you go to church or pray. You might think it wouldn’t be so bad to hurt someone else’s feelings—just this one time. You might stop reading the Bible or praying at night because you've got other things to do. You’re not the first to feel that way, you know. And you won’t be the last.

In fact, Christians have been tempted to betray their friendships with God ever since the beginning, in both big and small ways. And just like any friendship, every time we resist that temptation and stay faithful to that friendship, our faith grows stronger.

For the first three hundred years of Christianity, the followers of Jesus were under great pressure to betray their friendships with him. They lived in what was known as the Roman Empire, which extended from northern Africa all the way up to England at that time. For almost the entire period from A.D. 100 to 313, it was illegal to be a Christian in most of the Roman Empire.

That’s right, illegal—against the law. In our country, you can go to court and go to jail for things like stealing and killing. In the Roman Empire, you would go to jail for those things, too. But you could also be punished by the law if you were friends with Jesus.

How? Every person in the Roman Empire, no matter what their religion, was supposed to honor the Roman emperor as a god. If they would do that—once a year burn a little incense in front of a statue and say, “Caesar is god!”—they were okay and could go on home and mind their own business for another year.

But, of course, Christians refused to do this. They knew there was only one God, and to say anything or anyone else was a god would be a betrayal of their friendship with God. When they stood true and when they refused to honor false gods or the emperor as a god, the Christians got into trouble. Big trouble.

They were put in jail—dark, terrible dungeons. They were sent into exile to desolate islands where they were forced to work in mines. And worst of all, if they were really stubborn and still wouldn’t deny their friendship with Jesus, they were put to death.

The leaders of the Roman Empire did this because they really wanted to discourage others from following Christianity. They also wanted to provide entertainment for the ¬people of the empire. So when they executed Christians, they often did it in public, in the middle of huge crowds gathered in arenas. It was, believe it or not, like a big show.

There are many stories of the deaths of Christians that have come down to us over the centuries. These Christians who died for their faith were—and still are—called “martyrs,” a word that means “witnesses.” They’re called witnesses because that’s exactly what they were doing through their deaths: witnessing to their love for God and their friendship with him—their faith. Some of the more well-known stories of martyrs from those early years include the following:

St. Lucy, St. Agnes, St. Agatha, and St. Cecilia were all young women—perhaps in their early teens—who all suffered terribly for their faith at different times. The stories that have come down to us say that St. Lucy lost her eyes during her torture, St. Agnes was beheaded, St. Agatha was placed on hot coals, and St. Cecilia was suffocated and then beheaded.

St. Timothy and St. Maura were married only twenty days when Timothy, who was in charge of the sacred books of his Christian community, was ordered to turn them over. He refused, and his wife, Maura, was brought to the prison to try to convince him to give in. She wouldn’t cooperate, so both husband and wife were nailed to a wall of the prison, and, so tradition tells us, it took them nine days to die.

St. Marcellinus was a priest who was imprisoned during the last major Roman persecution, around A.D. 304. While in prison before his execution, he convinced many of the love of Jesus, including his own jailer.

There are hundreds—thousands—of other martyrs from these years who endured the most terrible pain. But the strange thing is, the stories that come down to us about their deaths, even those few stories recorded by the Romans who killed them, tell us that most of these women, men, and children who were killed for their faith died with peaceful hearts, sometimes even singing hymns as they were burned or dragged by animals in front of the cheering crowds. Their friendship with God was very, very deep.

Over the past two thousand years, many Christians have decided to die rather than betray their friendship with Jesus. Even today, Christians still suffer martyrdom in some countries. You will read about some of them in other chapters in this book.

All of these brave ¬people may speak different languages and wear different clothes, but they all have something important in common: They are best friends with Jesus, and they can’t imagine turning their backs on him, even if it means suffering.

You probably know how they feel—you can’t imagine turning your back on your own friends. When you’re tempted to, you probably just have to imagine how rotten you’d feel if you did, and that’s enough to set you straight.

Would anyone else have bothered to even look into friendship with Jesus if the Christians had betrayed him? Would it have seemed worth living for, if it wasn’t worth dying for? 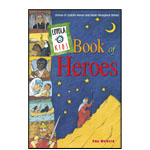 from Loyola Kids Books of Heroes