The Sacraments of Initiation are Baptism, Confirmation, and Eucharist. 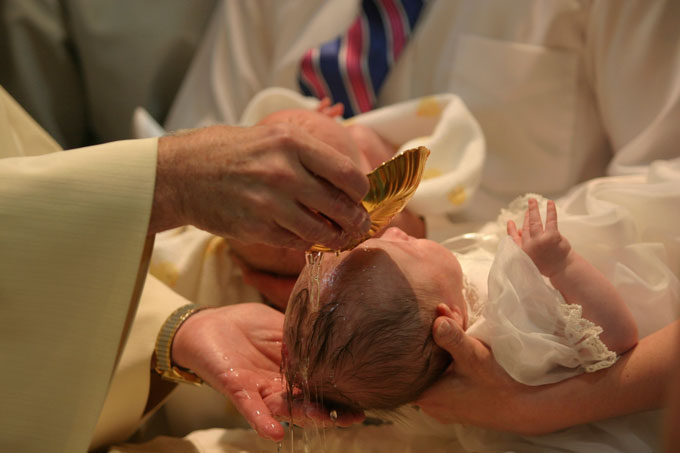 In the early Church initiation was presided over by the bishop. When Christianity became the official religion of the Roman Empire in the fourth century A.D., the number of people seeking initiation greatly increased, making the presence of the bishop at every ritual of initiation impossible. Permission was granted to local pastors to preside over initiation celebrations. The Western church opted to emphasize the unity of local churches with their bishops by reserving the Confirmation ritual for the bishop while allowing local pastors to baptize. In the West this practice has continued to the present day, resulting in a gradual separation of Confirmation from Baptism and Eucharist. Some dioceses, however, now celebrate the Sacrament of Confirmation in the Restored Order. The Eastern churches opted to maintain the unity of the Sacraments of Initiation, allowing local pastors to confirm at the initiation celebration. As the majority of those being initiated were infants, they would be baptized, anointed, and receive Eucharist soon after they were born, a practice that continues today. The Second Vatican Council reaffirmed the unity of the Sacraments of Initiation through the restoration of the catechumenate in the Rite of Christian Initiation of Adults (RCIA). Local pastors are allowed to confirm newly baptized members of the Church who have participated in the RCIA at the Easter Vigil.

The Rite of Christian Initiation of Adults (RCIA) was restored after the Second Vatican Council and has been mandated in the United States since 1988. This means that the normal procedure for preparing and welcoming adults into the Catholic Church is as follows: